When I found out that my husband and I were moving to Guangzhou, the first thing I did, after saying “Wow! We’re going to China!, was to look up Guangzhou on Wikipedia, because I’d never heard of it and had no idea where it was. Which is crazy when you consider that it is the third largest city in China with over 14 million people in the main city (not including millions more in its environs). It is one of the world’s main manufacturing hubs and is buzzing with international economic activity. Not to mention its rich historical and cultural heritage as Old Canton, China’s ancient door to the West. The world is such a huge and fascinating place; what other significant cities have I never heard of?

Now that I’ve lived here for over a year and a half, I can assuredly say that Guangzhou will stay in my heart forever. And, I wholeheartedly recommend adding Guangzhou to your list of places to visit if/when you come to China.

With that in mind, here is my list of Top 10 Must-See Places when you are in Guangzhou:

Ten years ago, Tianhe, the current downtown financial center of Guangzhou, was just open fields. A testament to China’s ability to build things at record speeds, today Huacheng Square sparkles with brand new skyscrapers, public buildings, and landscaped water features. Huacheng Square itself is located at the intersection of the International Finance Center (IFC), city’s public library, and Opera House. However, the Square is the middle of a long park that cuts through many city blocks to link one end of Tianhe to the other. The entire park ends with a dramatic view of the Canton Tower. On a cool, clear day, walking through the park is a pleasant way to traverse Tianhe. At night time, the park lights up with glittering displays on the major buildings and colored lights built into the tiles along the walkways. In November, an array of artistic installations light up the park during the annual Guangzhou Light Festival.

Take the metro to Zhu Jiang New Town to access the park by the International Finance Center.

View of IFC (right) from below

2) Four Seasons and Sky Bar at the IFC

While I’m sure the view from the Canton Tower is great, the downside of going up there is 1) it’s expensive and 2) you can’t see the iconic tower from there since you’re on it. Instead, on your visit to Huacheng Square head to the IFC Building and take the elevator up to floor 70 to the swanky Four Seasons Hotel. The hotel lobby has a beautiful view 70 floors up of the surrounding area and offers cafe-style dining including tea, coffee, and, if you’re feeling fancy, a decadent afternoon tea. If you head there in the evening, take the hotel lobby elevator up to floor 99 and feel like James Bond as you enjoy a well-crafted cocktail at the Sky Bar. It easily has the best view of the Canton Tower, Huacheng Square, and the Pearl River. The view is free, but the drinks essentially make up for that. Be sure to check out the bathrooms as well; each toilet has its own little compartment with windows that look out over the view below.

There’s a lot to love about Huacheng Square, but my favorite place there is definitely the huge public library. Rising up out of the ground like mountains pushed up by an Earthquake, the architecture is striking with its liberal use of glass. Take the glass elevator up to the 8th floor for a view of the building from above and then head the multicultural library to find a wide selection of books in English and other foreign languages. Just be forewarned that this library is often full of people studying, working, and reading, so you may have to search to find a free seat. Personally seeing so many people using a public library makes my heart sing, and it is always quiet and peaceful even when many people are there. Foreigners can get a library card at the front desk by presenting a passport and phone number. 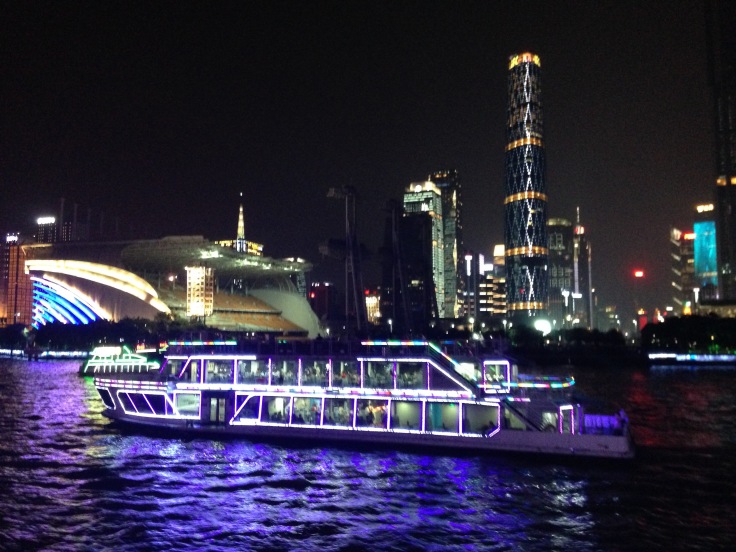 In addition to being used to transport goods, Guangzhou’s Pearl River river has become a major tourist attraction in recent years with the development of its impressive skyline. The best way to truly appreciate a view of Guangzhou’s new downtown is to take a cruise along the Pearl River at night. Tickets range from extremely cheap to around $15-$20 USD and can be bought before boarding the boat. The higher priced tickets are best, because they are usually outside with a great view. While you can get a dinner cruise option, I recommend eating elsewhere before or after the cruise, as the food onboard is likely to be pricey and uninteresting. Catch the cruise at the Nansha, Tianzi, or Dashoukou ports. I personally recommend Dashakou, only because that’s where I’ve gone before. 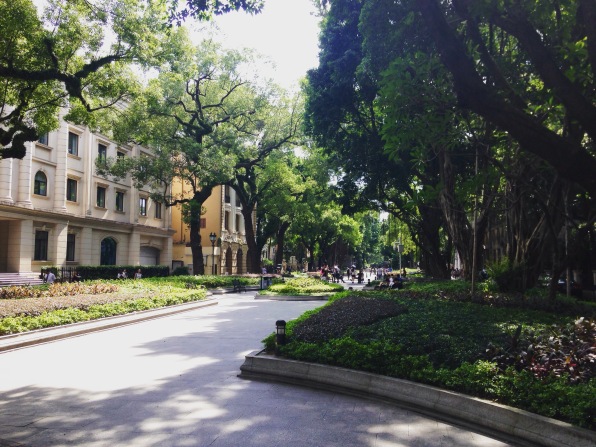 Located in the Pearl River, Shamian is a manmade island that used to be the West’s gateway to China and was home to many consulates up until recently when most relocated to Tianhe. Due to its long Western and colonial history, Shamian Island is a time capsule of old, European-style buildings. Most of the island has pedestrian-only paths lined with trees that make it shady and cool even on Guangzhou’s hottest and most humid days. It also is home to the most beautiful Starbucks I’ve ever seen in one of the old colonial buildings. You may laugh at me, but after a while in China, you’ll be similarly happy to see that glittering pillar of Western civilization/consumerism complete with iced beverages and a clean bathroom.

Take a stroll towards the river and stop to take photos of various entertaining statues and to people watch. Young couples love to take artsy photos of each other among the old buildings and older people play music or games in the shade. Duck into the musty-smelling antique shops or tourist stores to find treasures and gifts. Be sure to haggle if you want a more reasonable price, as I was able to find a qipao (traditional Chinese dress) for a steal.

Back in the day of the Chinese imperial exams, large Chinese families or clans owned large ancestral halls in cities where the young men of the family could stay to study and worship their ancestors. Built-in 1894 during the Qing Dynasty, the Chen Clan Academy made it through the turbulent 20th century in excellent condition. It is an artistic treasure with colorful pottery reliefs along its roofs and detailed wooden carvings throughout. Today, it is a folk art museum with displays of Chinese art, including interesting works that trace China’s relatively recent history through the 1930’s through 1980’s. Local artists sell their work in the academy shops and provide demonstrations of Chinese painting, calligraphy, and carving.

So far, my favorite market is “wedding street” or “wedding dress market.” Tucked into rambling old streets just on the edge of Guangzhou’s new developments, wedding street sells evening gowns, formal dresses, and, you guessed it, wedding dresses (note, it has very few men’s shops, there’s another market for that apparently). You’ll find dresses that are destined for Western markets at a fraction of the price- just make sure to bring your haggling game, especially if you are buying more than one dress. It is also an excellent place to see traditional Chinese wedding dresses in their red and golden glory up close, and there are a few stores selling other traditional styles like qipao. Prices are higher in the larger stores along the main road and in the main market building; cheaper options are available in the alleyways that meander into a warren of smaller stalls and shops.

My favorite thing about wedding street isn’t the dresses, but rather its location. This is old Guangzhou at its core. It is a far cry from the shiny skyscrapers of Tianhe. Despite the relentless pace of construction and development through the city, this area has retained its old heritage and buildings. Make sure to stop for a hot pineapple bun at a local shop before you leave and say a friendly “m̀hgòi” – thank you in Cantonese.

Guangzhou has many beautiful parks, a necessity in a city of chrome and concrete not only for people’s sanity but to help clean and cool the air through the liberal use of lush foliage, tall trees, and serene water features. Li Wan is essentially a large manmade lake with the park a series of walkways and open spaces above and along the water. Water lilies pop up on the surface of the water, so thick in places that the lake disappears under a field of green, pink, and purple. You’ll likely see locals playing games outside or singing karaoke with portable machines. There are several antique and curiosity shops along the waterway leading into the local neighborhood. Small shops sell everything from tea, to dumplings, to electronics, to tools, to smartphone covers. If you’re hungry after your walk, check out Pan Xi, one of China’s largest restaurants, which serves mouthwatering dim sum. Just be ready to point or bring someone somewhat conversant in Mandarin or Cantonese to help you order! 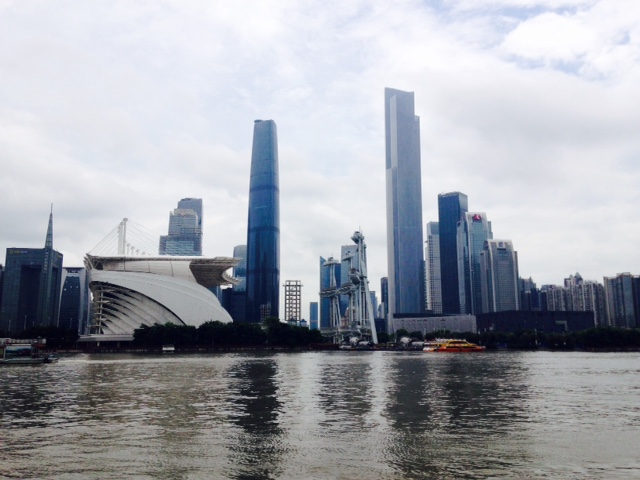 View of Guangzhou from across the river near Party Pier

Guangzhou is not exactly known for its nightlife, but if you are looking for a fun night out, Party Pier is the best place to head. Relegated to a relatively empty part of the Pearl River across from Tianhe, Party Pier is the largest/best-known area in Guangzhou for nightlife. There are other clubs, bars, and KTV (karaoke) places throughout the city, but in general, they are tucked away. My sense is that the City acknowledges that nightlife exists, but it just doesn’t want to see it. Admittedly, Party Pier can get a bit worse for wear in the early hours of the morning, but its array of restaurants and clubs are by and large excellent. One of my favorite spots for dinner is the Peruvian/Latin restaurant Cocina, which is best followed by dancing at Zapatas, known for its Latin beats.

I’ve saved my favorite for last. One of Guangzhou’s oldest residential neighborhoods, Dongshankou has a long, complex, and vibrant history in Guangzhou. As far back as the 1800’s, Dongshankou has been an educational center with some of the top schools in the city. Today, the old school buildings still remain in use, encircled by traditional walls complete with murals. In the 1920’s and 30’s, Dongshankou was a center of cultural and political activity. Mao Zedong himself lived there for a couple years in the 1930’s, and it is possible to visit his home, now turned into a children’s art school.

Dongshankou is best visited on foot or by bike. Take a leisurely walk along the tree-lined streets radiating out from the Dongshankou metro station, and duck into the many historic buildings turned art galleries. Kui Yuan Art Gallery in the 1922 building is an excellent place to savor art from Chinese and international artists as well as a coffee (Open 10am-10pm, closed on Mondays). Or explore the quiet streets by the speakeasy, Hope and Sesame (No.48 Miaoqian West Street), to discover smaller galleries like Art 11 (Open 10am-10pm except holidays). You may catch a traditional guzheng (Chinese zither) performance or a tea ceremony demonstration. Be sure to grab a pineapple bun and an iced milk tea from the many little cafes as you wander around. As evening drops, head back to Hope and Sesame for a craft cocktail and some jazz.

Guangzhou truly is a hidden gem with many interesting places to see. Plus, bonus item number 11 on my list…

Hong Kong is just two hours away by train!