Oh how I love Chinese New Year, a festival that has blown out the cobwebs in Guangzhou, brought sweet rain and fresh air, and given the grimiest street corner to most sparkling skyscraper a new clarity and shine. Chinese New Year festivities last 15 days, beginning on the first day of the new moon and ending with the lantern festival on the 15th day. Throughout those fifteen days, people celebrate by visiting with family and friends, eating dumplings, paying respect to gods and ancestors, and getting outside to visit historic sites and attractions.

The best part of being an ex-pat anywhere is definitely the opportunity to experience local hidden places out of sight from the more transient tourist. Not that shorter wanderings are less lovely, just different. I love to live a varied traveling life, squeezing in short day trips and weekends away and also settling in for a year or two in one place.

On the fifth day of the New Year, we found ourselves with a wide open schedule and a hunkering for exploration. With frequent checks of the maps on our ever handy smartphones, we set off along three different metro lines, a car, and our feet to finally arrive at Lotus Hill (莲花山 Lian Hua Shan) in the South East of Guangzhou and 12.5 miles from the city center.

We were not surprised to find that several thousand other people in Guanghzou had the same idea as we walked through the village below the park. If even 0.1% of people in Guangzhou all decide to do the same thing, that’s still at least 12,000 people out of the over 12 million people who live in the city not to mention visitors from elsewhere. After living in relatively small places most of my life, the sheer magnitude of China’s population can be overwhelming and often catches me off guard.

Fortunately, Lotus Hill Park is a huge place with many different points of interest and with enough space to get around the crowds and get unobstructed views.

Lotus Hill is famously known as an ancient quarry that supplied stone to sites around Guangdong including two thousand years ago to build the tomb of the Nan Yue King. It’s remaining stone cliff walls now rise up imposingly above surrounding forest and a winding maze of tunnels, grottoes, and water-filled holes below. 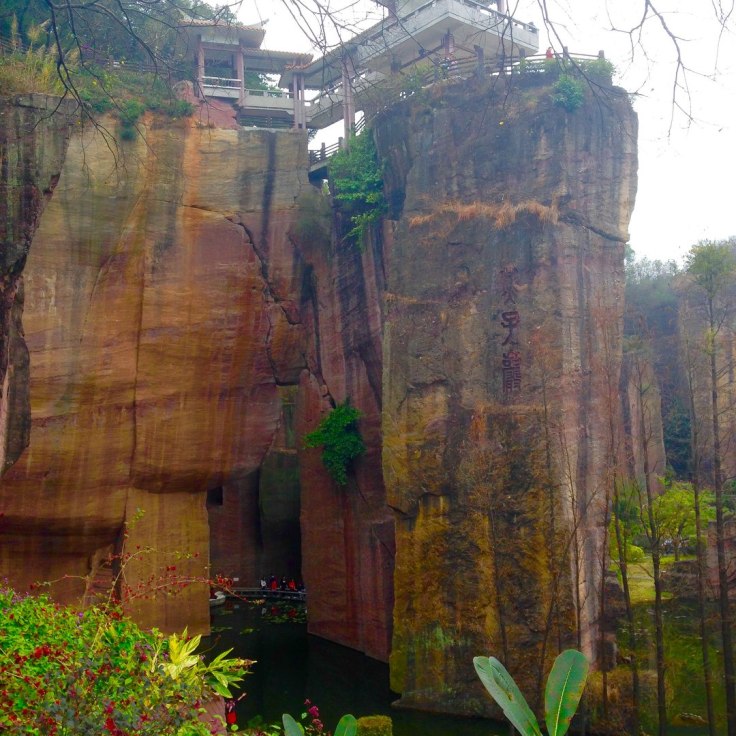 It was fascinating to see the quarry with our own eyes, since we had just visited the tomb of the Nan Yue King Zhao Mo the week before. Zhao Mo ruled from 137 BC to 122 BC over the Nam Viet Kingdom, an empire that stretched from Guangdong and Guangxi provinces in South China to Northern Vietnam. Only just discovered in 1983, the tomb contained thousands of treasures and historical information about the early Western Han Dynasty. Today, visitors can enter the tomb itself and see remnants of the interred bodies of the king’s servants as well as many artifacts.

Here is a replica of the king himself in the adjoining museum in his jade shroud.

Returning to present day, Lotus Hill Mountain Park contains many other beautiful cultural sights, including a large statue of the Goddess of Mercy, Guan Yin, the same Goddess we recently saw in Foshan. Most people accessed the statue by car, but we joined a few brave souls in walking up a few thousand million steps up from the quarry. At the top, I loudly declared to Amaury that I would NOT be hiking up any more hills that day.

Since we visited on the fifth day of the Lunar New Year, the park was full of local Guangdong visitors coming to pay respects to the Goddess at the start of the new year. Many people carried offerings of fruit and flowers. Others held complex golden standards aloft decorated with windmills, flowers, and pictures of the Buddha and/or other gods and goddesses including Guan Yin. We weren’t sure what these contraptions were for and wondered why people continued to carry them rather than offer them near the statue. Ever a source of helpful information, my Chinese teacher told me that the windmills on them are designed to blow the lucky air of the New Year towards the bearer.

Near the statue stood a tall tree adorned in red. Known as the “Wishing Tree,” people throw lucky coins tied to red ribbons to make a wish. Of course, we had to have a go to the general endangerment of everyone present. One of my erratic throws launched my coin onto the head of a small child who was innocently eating an ice cream under the tree. Fortunately, they didn’t seem to notice the projectile that bounced off their head. I quickly grabbed it and continued my throwing more cautiously several feet around the tree.

The victim of my coin-throwing is in the background

Winding our way down from the Wishing Tree, we entered a picturesque garden below a nine-story pagoda that I firmly refused to climb up. Not just because the stairs, mind, but because climbing up and down a claustrophobic, narrow, hundreds-of-years-old stairwell with a 1,000 other people was not appealing.

Instead, we walked around the pagoda and were stunned into silence save, for “oohs and ahhs,” for the next few minutes as we found ourselves in a sprawling orchard of peach trees, blossoms in full bloom.

We joined the other people taking artsy photos with the sea of pink and white. After a couple years of living in Washington DC and painstakingly tracking when the cherry blossoms would bloom, we couldn’t help feeling extremely lucky to have simply stumbled onto the peak bloom day of these delicate soft flowers.

Blossoms are like fireworks. It’s impossible not to have a look of beatific awe in the presence of something so special. I admit that my favorite part of watching fireworks is stopping to glance at the crowd. Every single face, no matter the age, is inevitably turned upwards, eyes wide and mouth often set in a round ‘O’ of delight. We could hear happy laughter among the peach blossoms, as we made our way out of the park and back to the urban jungle. 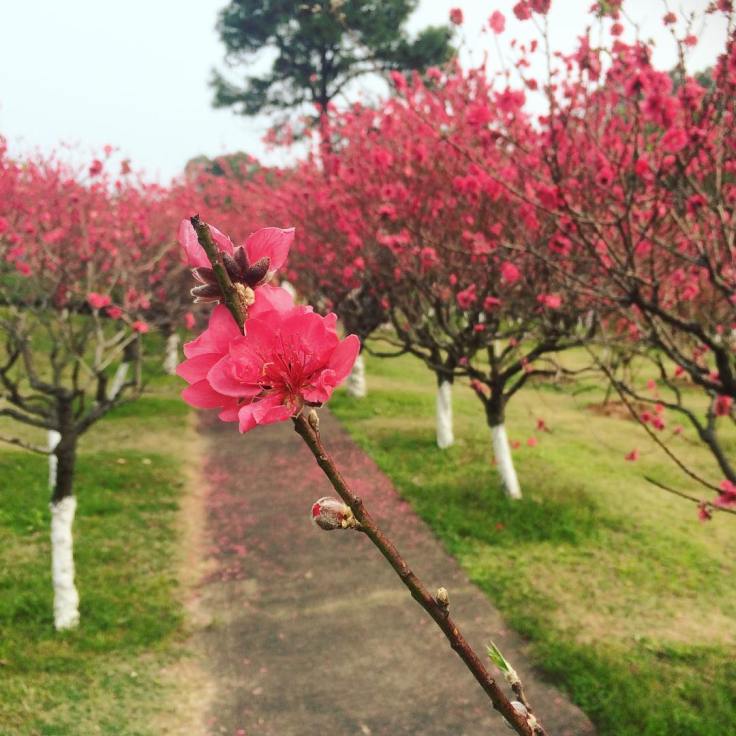