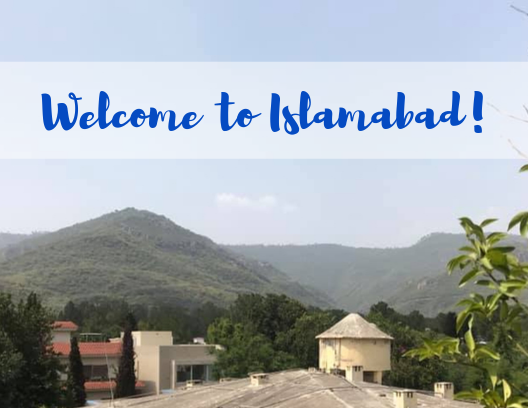 When we exit the Islamabad airport, the sun is already starting to rise turning the deep blue of twilight into gradient pinks along the far horizon. Our friend and a driver are diligently waiting for us outside arrivals, graciously picking us up at 4am. Despite the early hour and our long journey, we spend most of the ride chatting about life at our new home as it slowly sinks in that we are finally here.

Speeding along a long, wide motorway, I stare at the surrounding countryside, peppered with buildings, roadside ads, and occasional people walking or riding motorcycles. Such a contrast to our early morning arrival in Guangzhou almost three years ago, where the landscape was filled with tall buildings and we were struck by the sheer size of that mega-city. Islamabad has a much smaller population, just 1.5 million people in a planned city that has only been around since the 1960’s (not counting the smaller town/village there before). I realize that Islamabad will be so different from most of the rest of Pakistan.

The sun casts an increasingly golden glow along the sparse hills that turn to low buildings and walls. A large boulevard branches off from the main road, and I see the famous Faisal Mosque for a split second, its tall white spires instantly recognizable, though a large sign also helps point the way. As we walk around during our first few days, I often reflect that the walkways and buildings that are now so new will become familiar friends.

That the paths I’m taking now for the first time, will become routine and that I am now walking the same steps I will take later. These thoughts are comforting. What is now so foreign will become the everyday known quantity. In some ways, I am walking with myself. The me who will live and work here and ultimately know near everything about this currently strange and unknown environment.

The first few days in a new place are always tiring. A and I joke that it feels like we’ve already been here a month because each day seems to stretch out and be filled with so many new people, new experiences, and things to learn. We don’t get quite enough sleep. We try to push ourselves even further out of our comfort zones to meet people. We try to remember where things are and manage to get lost even in relatively simple and small places.

In the evenings, I go on long walks. The Margalla Hills rise up in the background and, as dusk falls, calls to prayer echo up out of the surrounding city. We’ve arrived during Ramadan, making the days quieter than usual with many businesses and restaurants closed. Though we haven’t yet explored much, we can still hear the city come alive at night as Pakistanis break their fast.

Cats pat quietly along the paths and meow occasionally at me despite being utterly uninterested in my attempts to pet them. Birds, some I’ve never seen before and then perfectly boring looking crows, perch in the trees and fly overhead trilling beautiful songs that mix with evening prayers. A cacophony of sounds that also render the night air peaceful. In the afternoons, I can hear children playing in the distance. These sounds of normal life are reassuring and make me feel more at ease as I adjust to such a new place.

Our third night, A’s colleagues invite us out to dinner at the Marriott. We take a car to hotel where we are then greeted by uniformed staff who usher us into a chandelier-lit lobby. I feel like a character in a John le Carré novel as we enter the hotel’s Thai restaurant and are welcomed into a separate room screened off from the main restaurant by intricately carved wooden screens. The food is delicious and as good as what we’ve had in Thailand. It’s easy to forget where we are as the conversation flows around the table. Considering the setting and the quality of the food, we are stunned by the bill, which is cheaper than most of the meals we had at casual dining places in the U.S.

Walking around, establishing my routine, finding my place, I feel more and more that this will be another excellent place for us. I also know that it will challenge me in ways I can’t even know yet. It is unlike anywhere I’ve ever been. It is unique in so many ways and only a small subset of foreigners come here. Yet, it feels accessible, and I think, as we settle in more, we will quickly make it home.