We set off for Lahore at six in the morning. Just me and my patient driver, who shares that he is used to these early morning trips out of the Islamabad and into Pakistan. The country begins outside the new, somewhat impersonal capital city and, despite the early hour, I’m excited to explore.

Already, the sun is peeking up over the embassy walls, and the air is warm and thick with humidity. It rained the day before, heavy monsoon downpour cooling everything down. Those sudden showers bring green life to Islamabad and the roads are lined with verdant, jungly vegetation. Familiar sights fade as we drive further out of the city, dense houses giving way to open green fields.

I doze for a while and then wake to chat with the driver and gaze out the window at the unknown landscape. Comparisons are impossible to avoid. Much like the middle of California, my home state, the route from Islamabad to Lahore seems sparsely populated, made up of agricultural or wild, untamed land. Eventually we come through a mountainous pass that cuts through the famous pink salt mines. 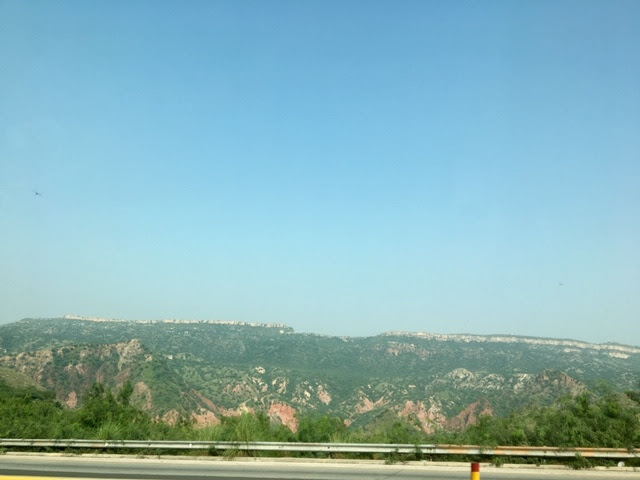 Large trucks, bedazzled in colorful truck art, wind their slow way along the curvy roads. I snap a lot of pictures, most that are just abstract glimpses of the scenery. 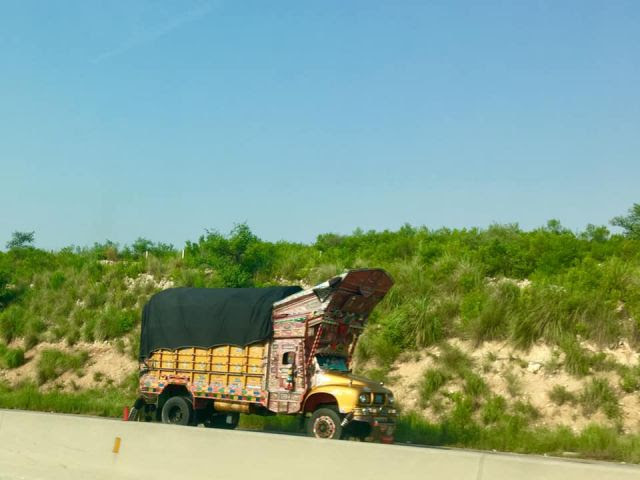 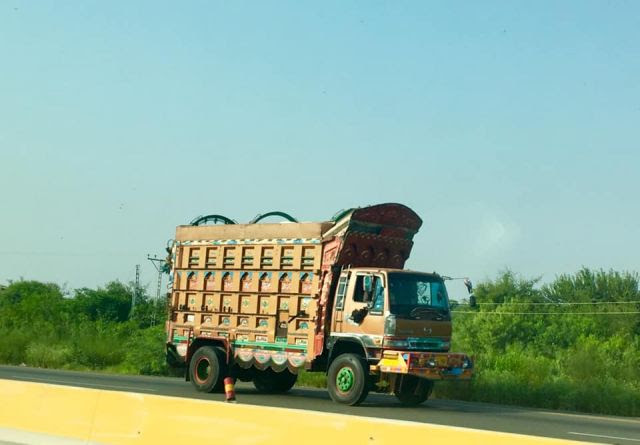 We stop for a break halfway along at a large rest stop with a Hardees and a McDonalds. The last time I had McDonalds was while traveling in China- sometimes its the only place to get a decent breakfast and a coffee. I opt for an Egg McMuffin and, as I’m in Pakistan, a cardamom milk tea.

As we head off, the landscape feels subtly different. I am no longer departing Islamabad, but arriving in Punjab, and its densely populated capital, Lahore. Pakistan has four main provinces, Balochistan, Khyber Pakhtunkhwa, Sindh, and Punjab as well as two autonomous territories, Azad Jammu and Kashmir (AJK) and Gilgit Baltistan, and the Islamabad Capital Territory. Punjab is by far the most populous province, and at over 110 million people, has over half the population of the country.

We pass concrete buildings that stretch as far as the eye can see and are interspersed with advertisements, business signs, shops, and office buildings. Slums seemingly made from trash and debris line the highway in places. The improvised tented roofs, made of fabrics and sheet metal, have faded colors worn from the elements. On the way back to Islamabad, my return driver will share that the inhabitants walk the roads, begging and trying to sell trinkets to the passing cars. From this distance, there is a silence to the poverty; the slums seem empty of people. Perhaps most are away during the day, or I am too far removed in my comfortably air-conditioned car to see them. I feel a deep wrongness and reflect on similar tent towns I’ve seen along highways in the U.S.  A structural ill that feels gigantic in scale yet is right there at the level of the individual.

We pass a toll booth and are in the city. Lahore has long, wide boulevards lined with lush trees. We head up the canal road, Lahore’s major artery, that aptly follows the muddy brown canal. 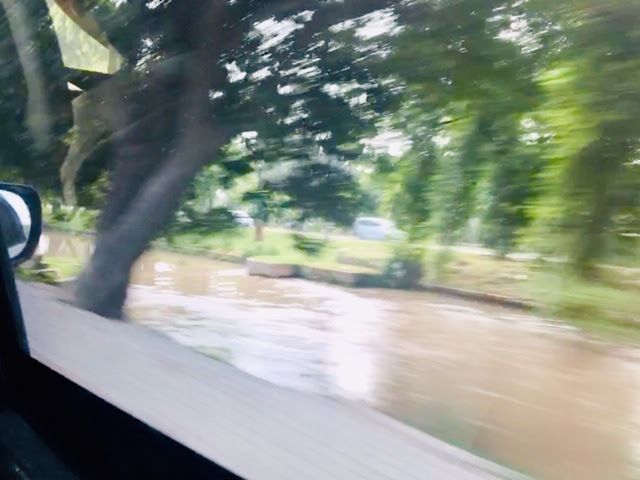 My driver points out different landmarks to me, and shares that Lahore is known as a “garden city” as he points out public park after public park, government buildings surrounded by green space and trees, and several walled university campuses. It is a city of learning, culture, and movement. Cars, bikes, tuk-tuks, taxis whizz by our slower large car and their honking is a consistent background noise. I fairly press my face to the window, trying to see as much of the city as I can from my limited vantage point. 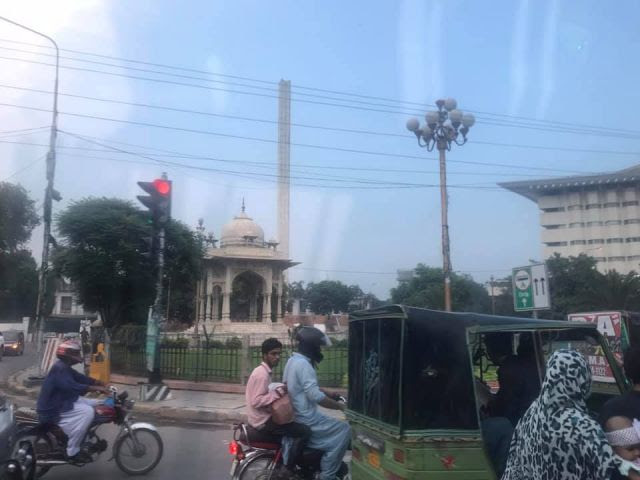 We go past a women’s university. The school is made of red-brown brick buildings, some over a hundred years old, arranged around tree-lined courtyards and open green lawns. Young women sit on benches, walk along the brick paths, or lounge on the grass chatting, reading, studying. Some have head-scarfs, some do not.

Time and again, I have to set aside my preconceived notions about Pakistan, because this country is deeply complicated. It has places where women are barely registered as human; it has places like this where they are learning to be lawyers. Again, comparisons cause me to see many other cities reflected in Lahore, but underlying my personal perspective, is a place unlike any I’ve ever seen. Before coming, numerous Pakistanis, several from Lahore, told me that Lahore is a cultural capital of Pakistan, an economic hub, a place of learning, a place for foodies and lovers of spice. It’s also a place of deep, Lahori hospitality that wraps visitors up in warm welcomes and plentiful cups of tea.

When organizing this trip, I purposely arrange meetings over lunch and dinner so I can try out food in Lahore. A highlight is definitely my dinner meeting at Spice Bazaar where I get to sample delicious Pakistani food. I have a huge lassi (sweet yogurt drink), salted mutton, lamb curry, palek paneer (spinach with Pakistani cheese), and finish up with kolfi, Pakistani ice cream that basically tastes like fudge in ice cream form! As I eat, I get quite a few stares from the other diners, especially children, since I seem to be the only non-Pakistani person there. Several different staff members, including the manager, come by and check with me directly on how I like the food. Thankfully it’s all absolutely delicious, so my feedback is genuine and effusive. 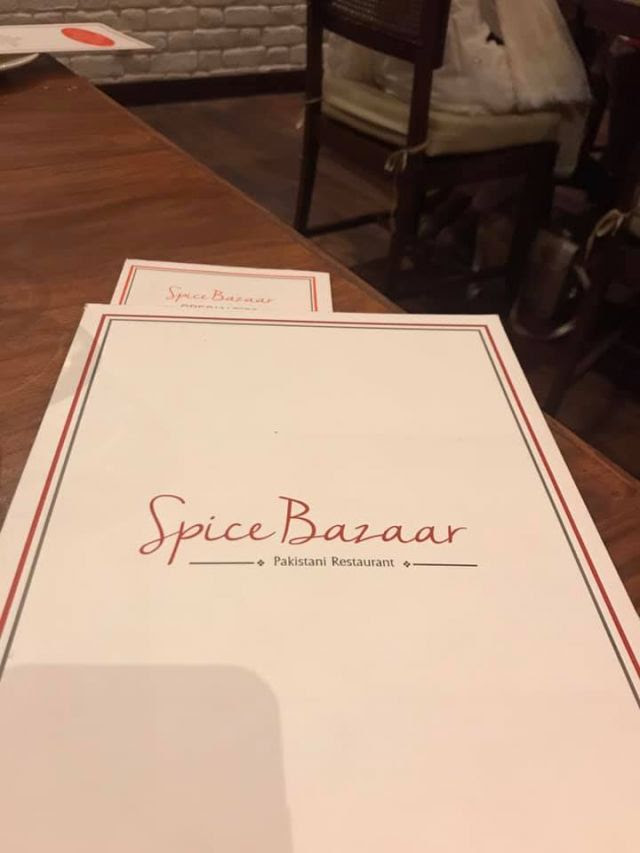 Before we head out, my colleagues insist that I also try Paan from a cart in the restaurant courtyard. Paan is a Pakistani and Indian after meal treat that is traditionally served on betel leaf. As that leaf has psychoactive properties, I triple-check that my culinary adventure involves a boring, normal leaf. My Pakistani colleagues assure me that if I did try the actual leaf I’d be extremely sick, so since I feel fine afterwards, I assume the best. The man at the paan cart shows me each of the different ingredients that include dried fruits, fennel, small candies, nuts, different syrups, and other herbs/spices. He then puts a mixture of them on the leaf, covers them in syrup, folds the leaf, and presents it to me. One of my colleagues then directs me to bite down on the folded leaf and then tuck the whole thing into the corner of my mouth to suck on. 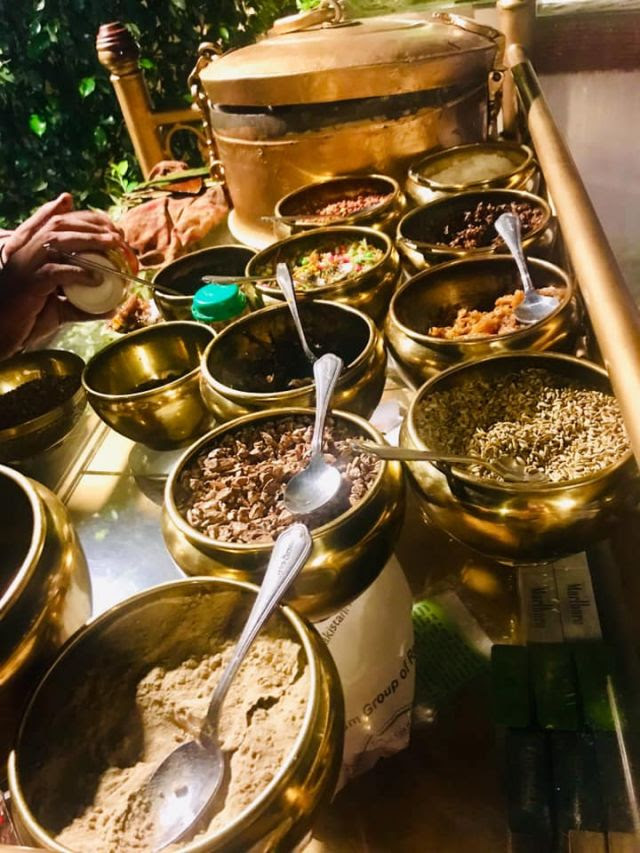 A certain amount of awkward embarrassment follows as I try to gracefully thank my colleagues for meeting with me while talking around a huge wad of sticky stuff in my mouth. Drooling a bit and trying not to make more of a fool of myself, I say my goodbyes.

It feels that just as I arrive in Lahore, it’s time to go. Yet, my time has been as full as it could be and, despite all the limitations, I feel like I got a small taste of this vibrant city. Finally, I can say that I have visited Pakistan.

This trip also has me reflecting on a beautiful analogy I read this morning from an unknown source:

You are holding a cup of coffee when someone comes along and bumps into you, making you spill your coffee everywhere. Why did you spill the coffee? You spilled it, because there was coffee in your cup. Had there been tea in the cup, you would have spilled tea. Whatever is in your cup is what will spill out. Therefore, when life comes along and inevitably shakes you, whatever is inside you will come out. When life gets tough, what comes out? Joy, gratitude, humility, peace? Anger, bitterness, harsh words, fear? Let us work to fill our caps with forgiveness, words of affirmation, kindness, and love (paraphrased).

I am thankful for my quick trip to Lahore that matched my openness with hospitality, warmth, complexities, and a gentle reminder to put preconceptions aside and experience new environments fully. My cup indeed runneth over.