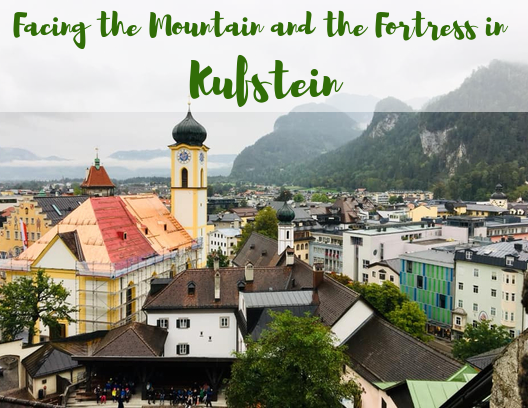 My husband likes to plan travel around fitness. That is to say, around him competing in cycling races, triathlons, half marathons, etc. When he proposed going to the tiny town of Kufstein in Eastern Austria, so that he could compete in the local Radmarathon cycling race, I was initially a bit skeptical of what else there could be to do there. But researching it from my vantage point in hot, humid, dusty Islamabad, yielded photos of impressive mountainous vistas, green valleys, a winding glacier blue river, an epic fortress perched atop rocky outcrops, and a small town of short, colorful buildings, and pedestrian-friendly streets. Sold.

We arrive in the mid-afternoon via a car, two planes, a metro, and a train. Tired, a bit groggy, and ready for a shower and a sleep, we lug our baggage, including rolling bike bag, from the station, over a bridge, through the pedestrian-only city center, and round a corner to our hotel. Mountains, dark green with thick trees, loom over us. Despite my fatigue, I already start to relax as I breathe in crisp air, laced with an icy chill from the nearby peaks.

One of the perks of traveling from South Asia to Europe as we’ve just done is losing three hours. It means that we can go to bed at 8pm (11pm our time) and wake up at 6am (9am our time) feeling refreshed and ready for the day. As A prepares for his race, I do lazy bed-yoga (IE no room in the hotel room to lay out my mat, so I stretch in bed instead) and look up where to eat breakfast later that morning.

A ready to go, we head down to the starting line of the race. It’s chilly and wet, a slight mist hanging in the air and most people wearing rain jackets. Everything is in German, so we have to pay close attention to figure out where to be and what’s happening. 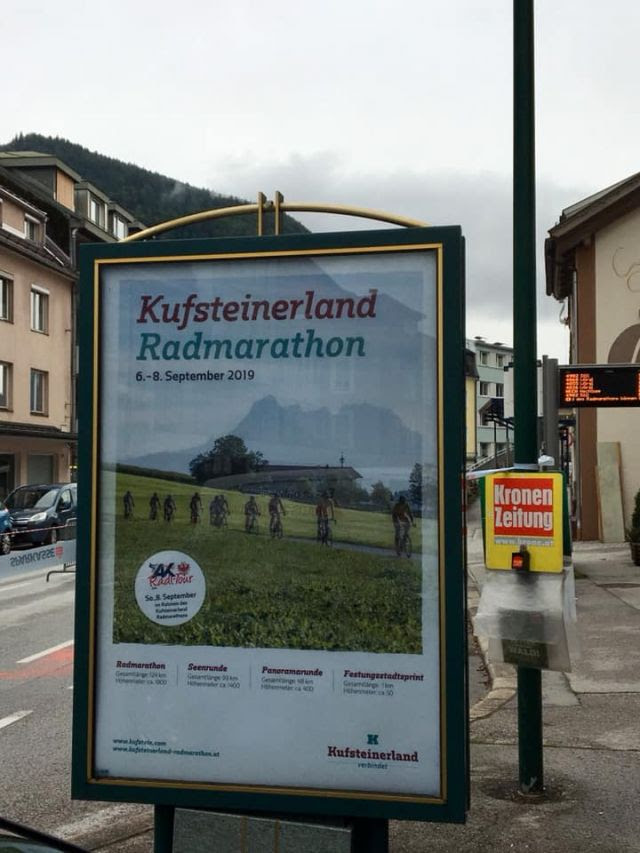 There’s an electric feel of excitement and nerves in the air, which mounts as more and more riders arrive. It seems that most everyone is German or Austrian. An excited MC rattles off information and updates over a loudspeaker that mixes with upbeat music. Finally, he counts off the start (eins, zwei, drei!) and they head out.

A woman next to me comments something in German, and I have to tell her I don’t speak the language. She switches to perfect English with a smile and shares how she is worried about her husband riding that day, because it’s so wet. The mountain roads will be treacherous for cyclists and cars alike. A has chosen to do the most difficult and longest course that winds up and down over 125km of steep mountain terrain. I turn my phone’s ringer up and pray he’ll be ok.

With nothing else to do at the now abandoned race start, I wander around the little town for a bit until the café I’ve found for breakfast opens. I enjoy a hot coffee, a pretzel roll, and some tasty muesli with yogurt while writing. It’s idyllic. 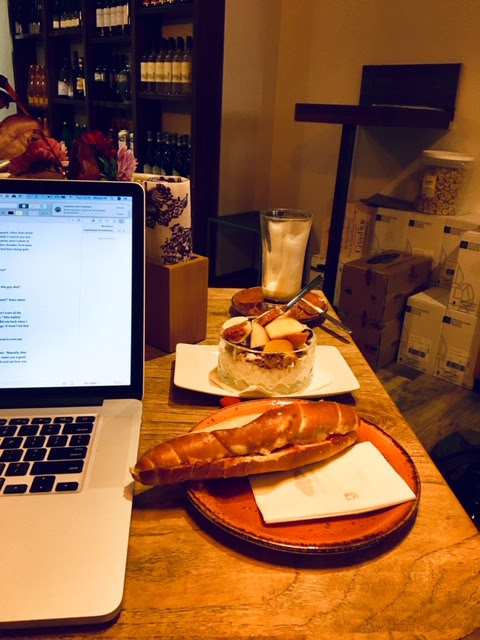 Full and happy, I turn to the main (possibly only) tourist attraction in Kufstein, the imposing Festung Kufstein, aka fortress, that overlooks the town. It’s a brief but intense hike up, since the cable car is not running on a Sunday, but I enjoy the feel of stretching my legs after being in a plane most of the day before. 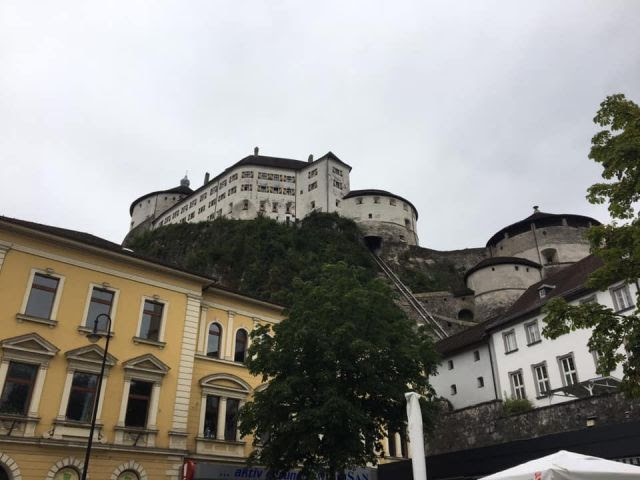 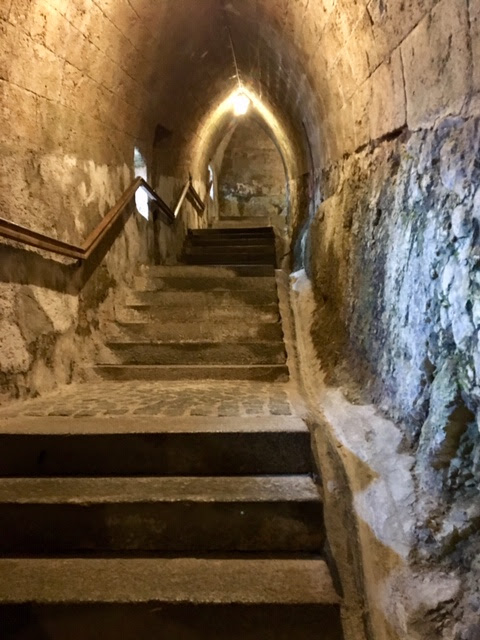 Festung Kufstein is remarkably well preserved, considering that it has been the sight of many battles over its long history. It dates back to the 11th century and swapped back and forth between Bavaria and Tyrol. Today it is a museum and excellent viewpoint over the town and valley. 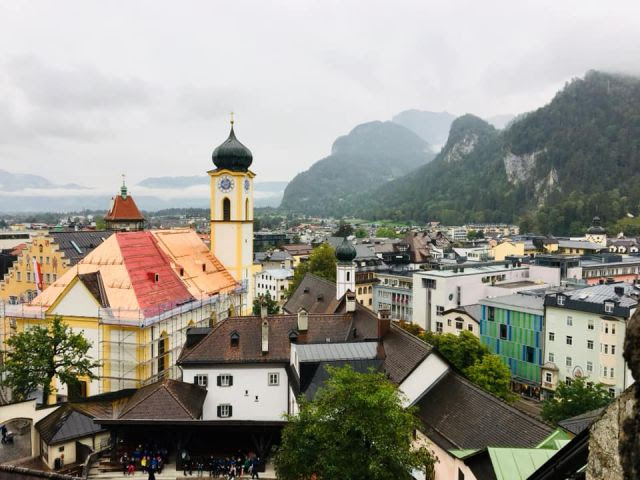 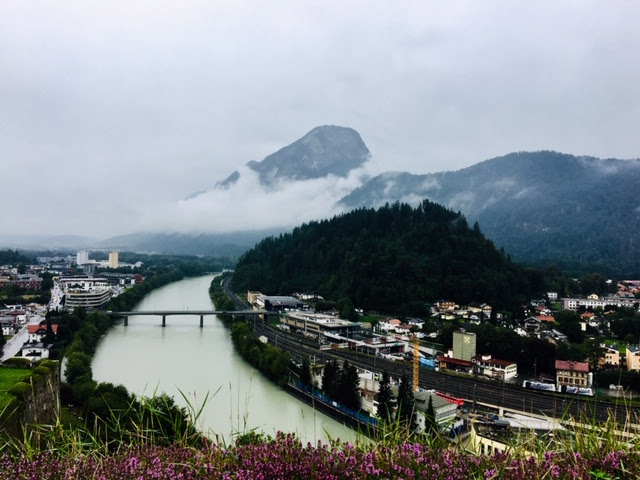 Many of the castles I’ve visited in the UK are ruins today, so it’s a treat to walk around one that is still mostly intact. My favorite part is discovering that the escape tunnel underneath the castle is open to tourists. It pops me out in an entirely different part of the complex to where I entered. 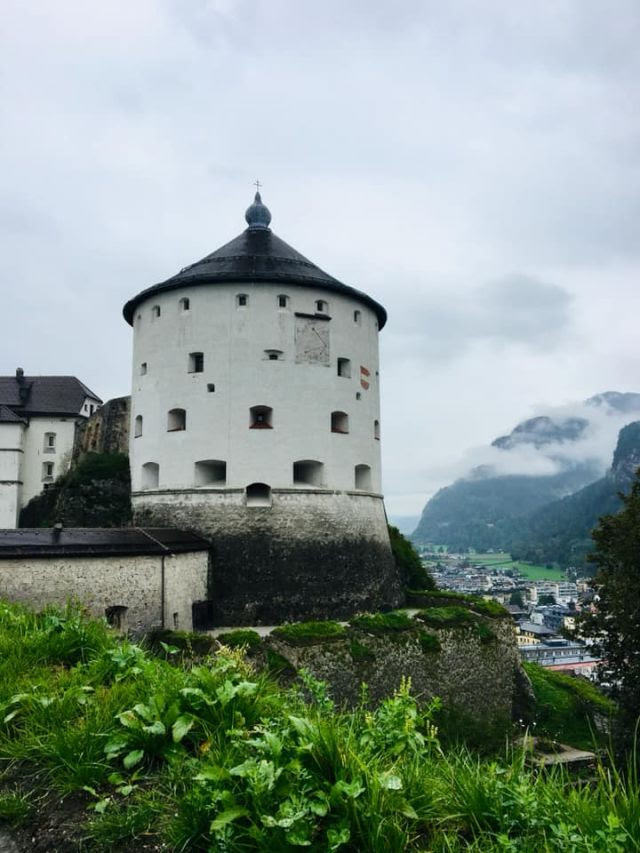 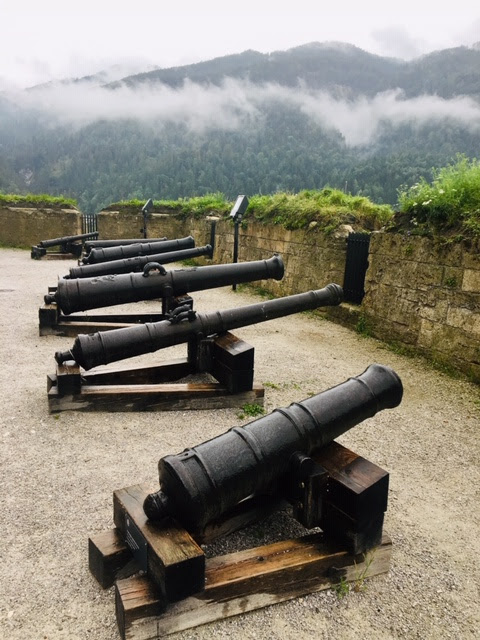 The museum exhibits include a particularly gruesome one on medieval torture that I somewhat regret entering. Large Amnesty International posters are posted at the entrance, reminding visitors that torture is still horrifically used in many parts of the world. The other museum exhibits are mainly in German, so I breeze through most of those, but enjoy seeing the ancient waffle irons. 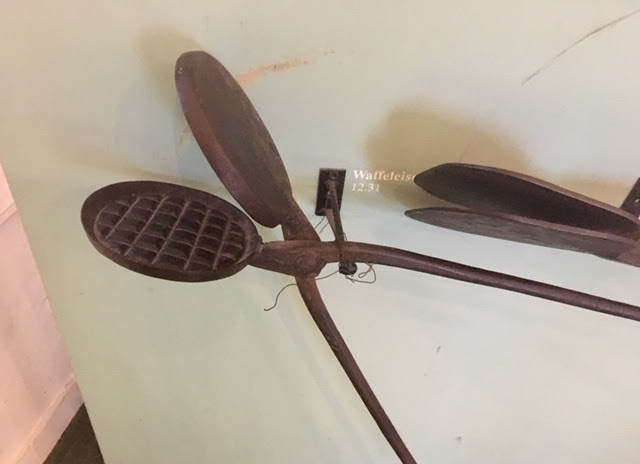 Finding myself worrying about A, I take a look down just as my phone pings with a message from him. After a long 70km slog up and down slippery mountains, a fall and a scraped leg, and numb hands and feet from the cold weather, he has decided to call it a day. I feel disappointed for him, as he trained so hard for the race, but also relieved that he knew when it was right to head back. We agree to meet back in town shortly.

As I start my descent, the organ housed in a lower part of the castle starts to play. Its dramatic, classical pieces reverberate around the whole castle, sounding just as loud in the upper levels as down below. The next morning, listening from below, we find out that the organ sounds just as strongly down in the town. 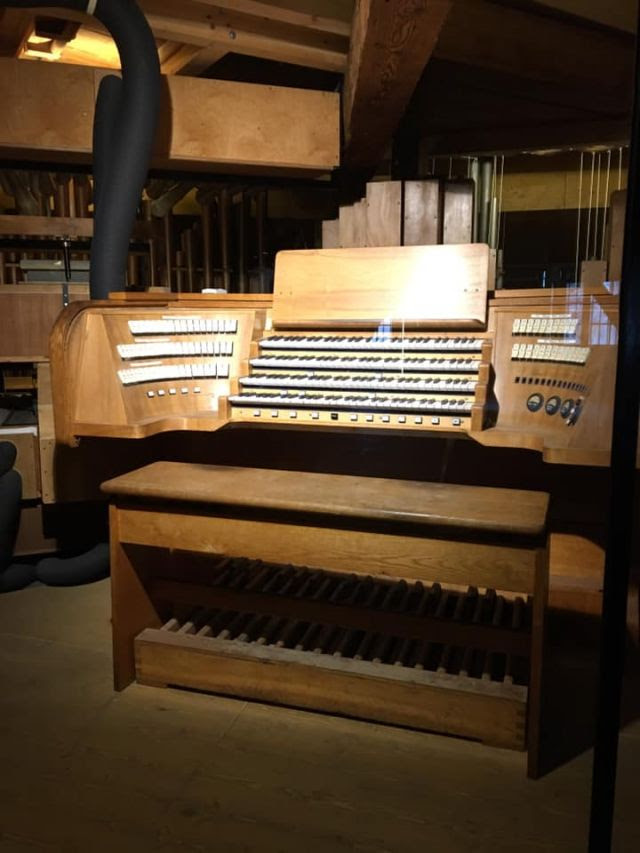 On my way down, I stop into the yellow church I saw from above.  Earlier I walked past as the congregation streamed out, but now it’s empty and quietly peaceful. 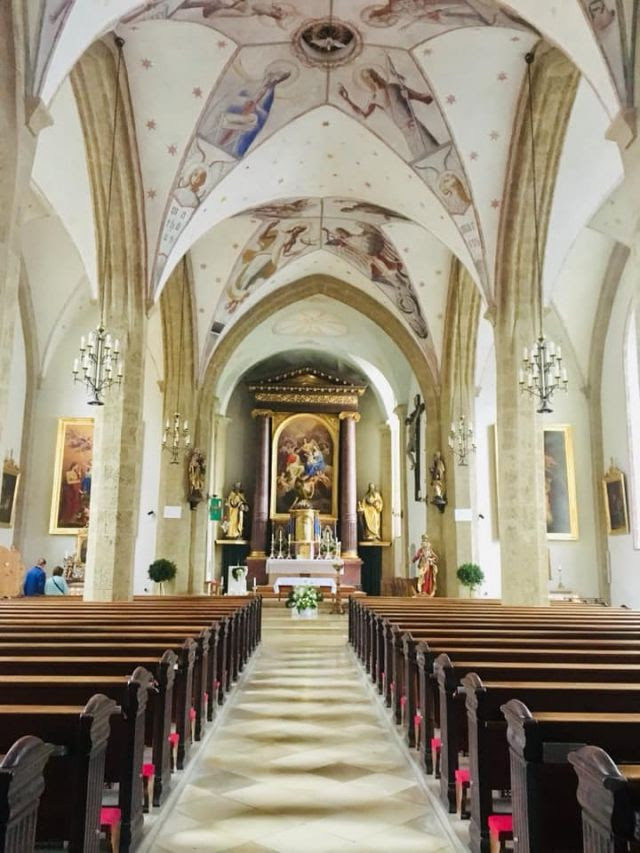 I meet back up with A in the town center. The rain is coming down strongly now and he is shivering slightly, as he gives back the jacket the nice driver had lent him to keep him warm on the trip back. We take the bike back to the hotel and then head to a surprisingly modern and hip burger place down the road. It’s then time for a well-deserved nap at the hotel.

There isn’t too much else to sightsee in the town on a late Sunday afternoon since all the shops are closed, so we hibernate for a bit and then eventually make it out for a more traditional Austrian dinner. The restaurant, Auracher Löchl, is down a touristy street populated with shops selling traditional clothes ostensibly for Oktoberfest. I order some cheesy dumplings with pork and gravy, and A opts for a salad with fish, since he’s still full from lunch.

We also have our first experience with a new favorite drink, “Hugo” – a take on a spritz with sparkling white wine, soda water, lime, and elderflower syrup.

The gray, rainy weather breaks the next day, and we spend the morning wandering around the little shops in the town center. A laments that the sun waited till after his race to finally come out. Kufstein is a perfect short stop while in Austria, whether or not you’re there for a cycling event. Rain or shine it is beautifully picturesque, and, for us, a literal breath of fresh air at the tail end of a hot, South Asian summer.