Islamabad’s winter is cold and gray, the air heavy with soot from people burning wood, coal, and trash to stay warm. Though we enjoy that Pakistan has seasons, we lament the brown haze that hangs heavy over the horizon and masks the mountains in the distance. The nights are long and dark and fill my hair with the smell of smoke.

We are grateful for the occasional rain that sweeps through and washes away all the dirt and grime. Living in countries with poor air quality has taught me to love rainy weather. Then one day, after a particularly bad bout of air pollution and several days of heavy rains, the world is washed clean and with it the winter seems to have gone. I wake on a Saturday to cornflower-blue skies and only a slight haze hanging over the Margalla Hills.

I grab my yoga mat, send out a message to friends that “we’re on!” and head to a field for “Yoga on the Green,” teaching my first outdoor yoga class. The sun-kissed earth and dry grass, dead from all the rain and recent cold, makes it more of a “yoga on the brown” experience, but so what? The day is gorgeous, the temperature at a balmy 65 with promises of low seventies to come, and my energy level is high.

Ten students join me for 75 minutes of outdoor yoga and it is glorious! A sweet cat joins us for the warm-up stretches and visits each student to make sure we’re all doing ok. 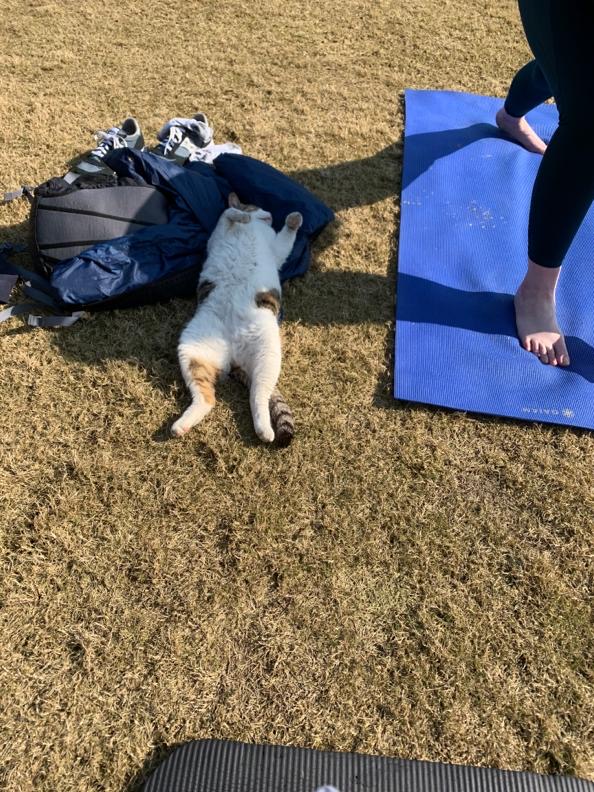 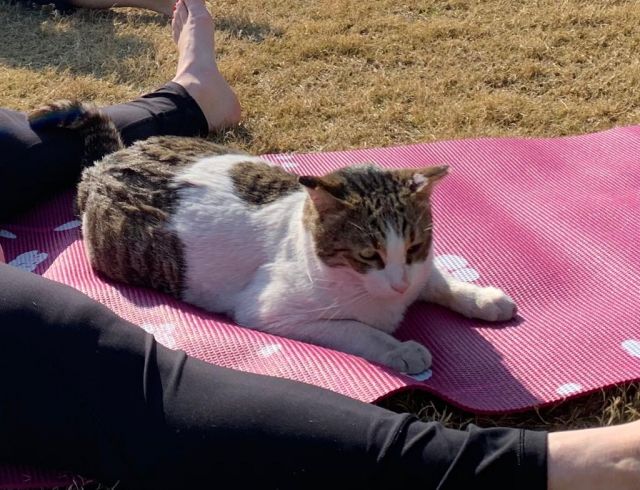 The next day dawns with similarly beautiful weather. Though the brown haze is growing, as it generally does without rain, the air quality is still at a perfectly reasonable level to be outside. We head over to Said Pur Village, one of the original villages that predate Islamabad, and meet up with local friends for lunch and explorations. 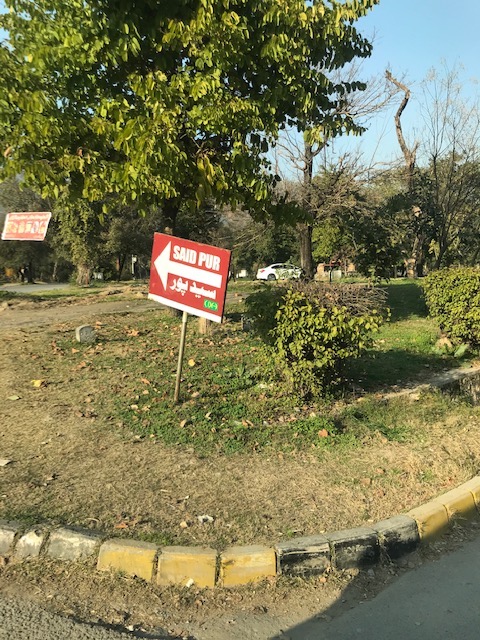 Islamabad is a planned capital. Built in the 1960s, it hasn’t been around for very long and most everyone here considers themselves as being from somewhere else. That is, except for our driver who happens to be from Said Pur himself. “I live just over there,” he gestures as we drive up the bumpy road into the village, passing goat farms, birds of prey swooping and gliding, and small squat concrete buildings that seem built up on top of each other. It’s only about 15 minutes drive from where we live and yet feels worlds away. 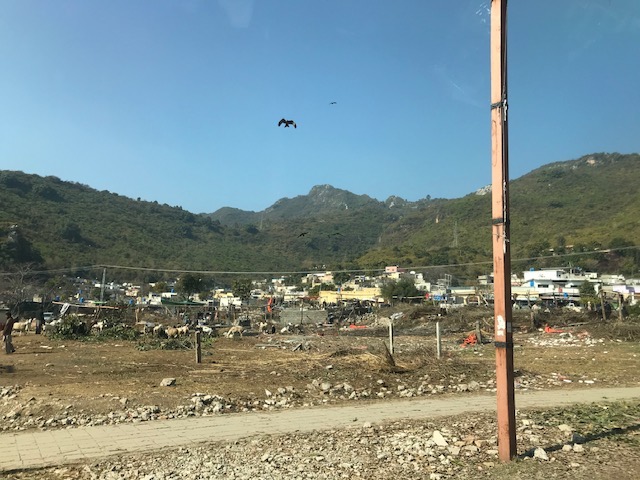 Nestled at the bottom of the Margalla Hills, Said Pur has existed for over five hundred years. It dates back to the Mughal Empire and is named after the Sultan Said Khan, son of Sultan Sarang Khan who ruled over the region then. Some of the Hindu temples have been preserved in the modern village.

We meet up with our friends and explore some of the small shops that have just opened. Remarking on the goats we passed, our friend shares that the black goats are the most pricey, because slaughtering a black goat is supposed to remove bad luck. The rest of the goats will fare better until Eid-Adha comes later in the year and goat is the main dish at the celebrations.

Heading up a rickety set of metal stairs, we enter a shop overlooking the central parking area. Inside is a treasure trove of local art, handicrafts from around Pakistan, carpets, precious and semi-precious stones, jewelry, and framed swords and guns. It’s part tourist stop, antiques shop, and museum. 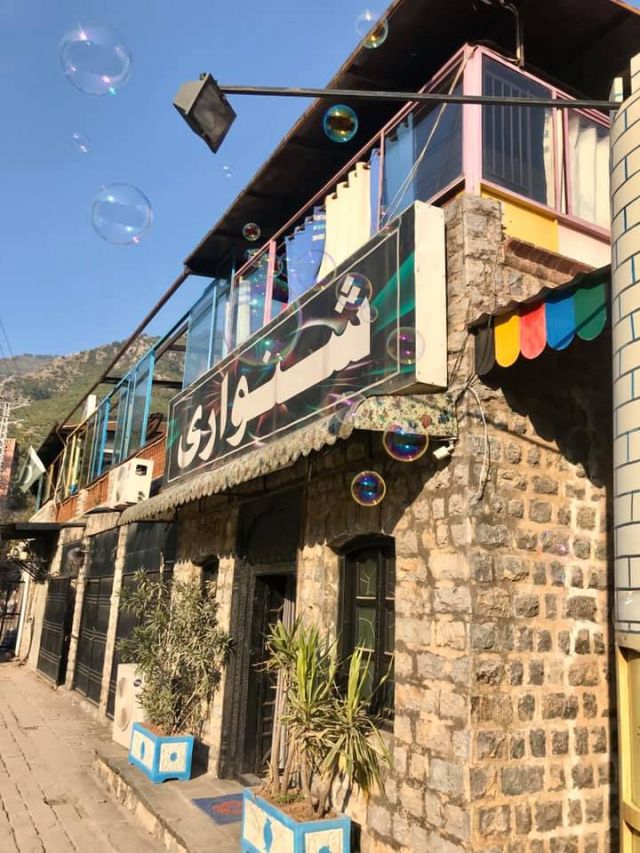 After exploring the shops and buying a few must-have (re: I want and A caves) items like hand-painted mugs, some earrings, and a flower vase painted blue with small red and white flowers, we decide to take a break for food.

We head to Des Pardes restaurant which promises us “Mughal food as from centuries ago.” The menu is extensive and has the normal “international” section with burgers and fries as well as a Chinese page with kungpao chicken. We hand the menus to our friends and ask them to please order Pakistani food. They order us a feast of palak paneer, chicken curry, kebab, chutneys, lots of naan, and of course sweet lassis to wash it all down. 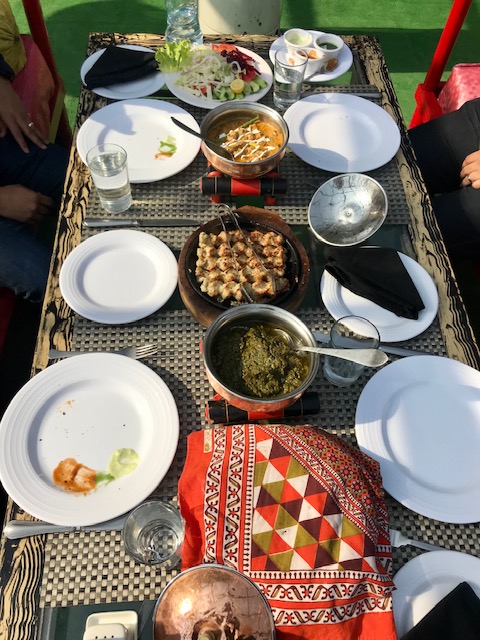 Full and feeling lazy, we decide to head up to the Hot Spot cafe, a local cafe chain, overlooking the village for a nice view and a jolt of caffeine. Splitting a pot of tea, we watch as small children in the village below fly homemade kites . The colorful darting forms flit in and out of view against the green backdrop of the Margallas and the browns and grays of the village. 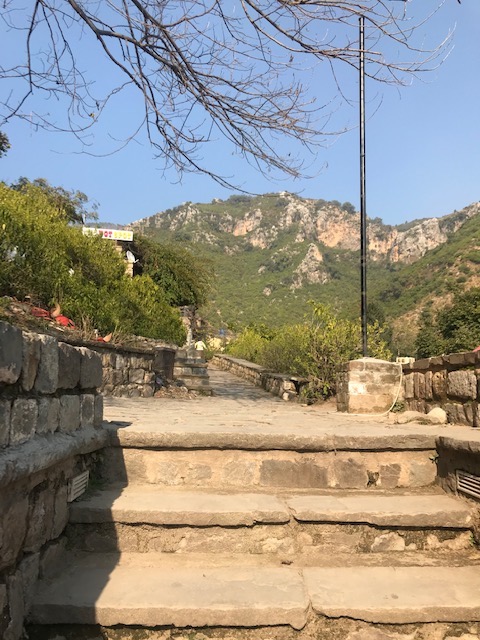 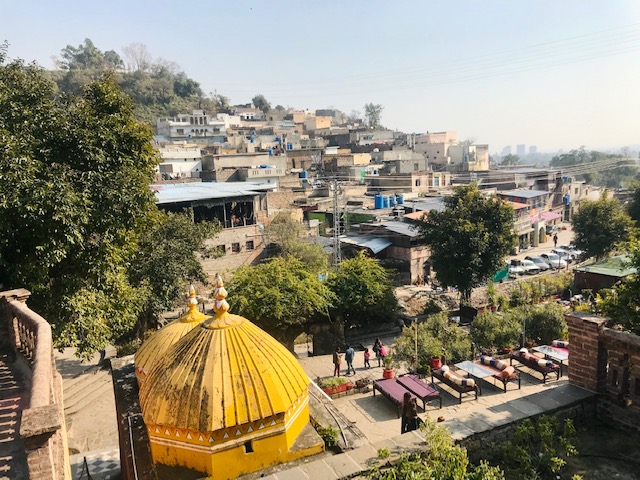 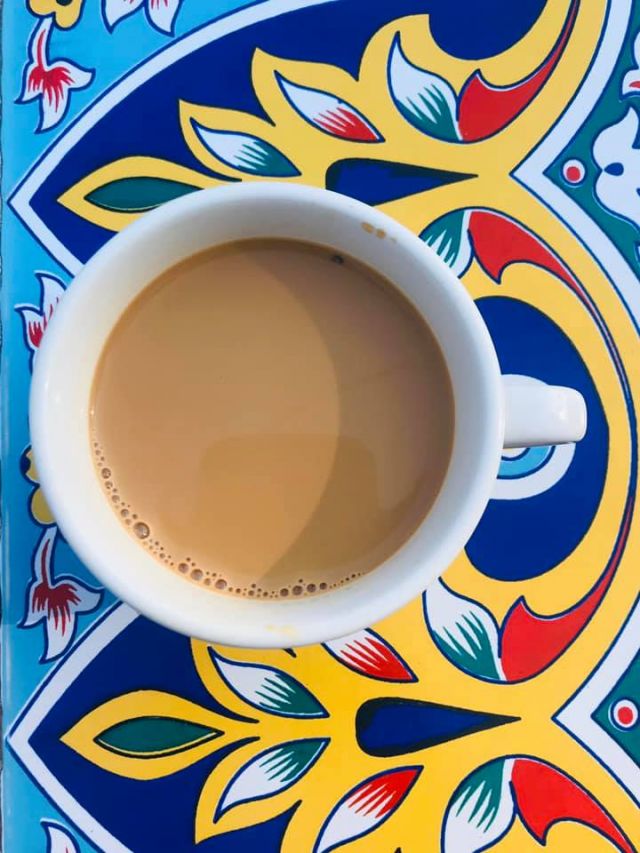 Our friends share how kites like these are common during spring time and even more so in Lahore where they are associated with a spring festival called Basant. When they were kids, everyone would head on to the rooftops in Lahore to fly kites, covering the sky with color. However, my friend laughingly shares how people started using their kites to try to cut down other peoples’, going so far as to use special string, glass, and chemicals to cut through strings. Apparently it became so intense and hazardous for drivers in the streets below, that Lahore had to ban kite flying… though it seems it may be making a come-back in recent years. From our vantage point high above the village, the kites lazily flit and dip as children run along the rooftops urging them higher. 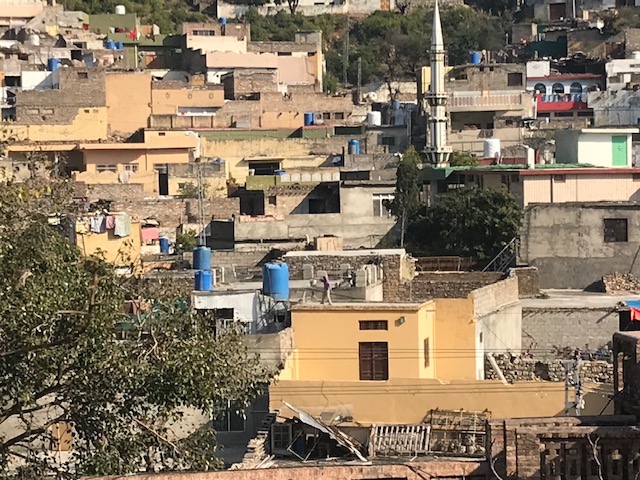 I tried to capture the kites, but they didn’t show up well.  Here is the blurred figure of a child running along a roof.

Revived by the tea, we head back down into the village to visit more of the cultural sites.  We walk up a set of stone steps to a courtyard shaded by a large hollow tree and comprised of three main buildings, one a bit like a stupa, another with a bright yellow roof, and a third much larger building with arched doors and decorative murals. As we start to explore, a man dressed in a light-blue shalwar kameez and wearing a badge around his neck approaches us and takes us under his wing. Walking along with us, he explains that the two small buildings are a Hindu temple and a Sikh gurdwara; the third larger building is an old school that is now a museum. He speaks in Urdu, but talks directly to us and I catch the odd word here and there. Our friends fill us in on the meaning in the pauses between explanations. 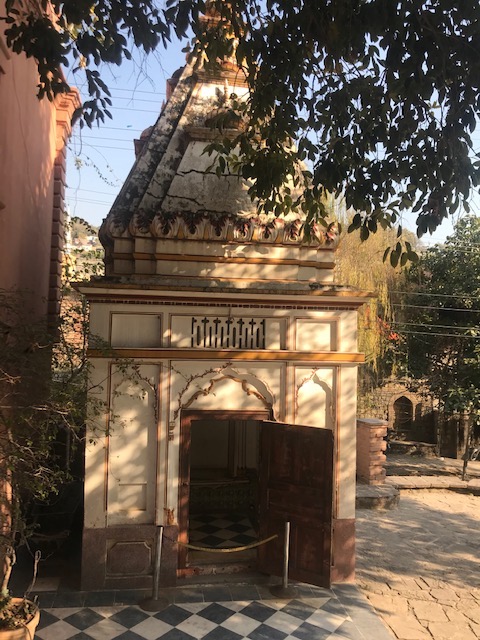 Removing the cordon in front of the Hindu temple, he ushers us into a small, cool room, somewhat graffitied, but otherwise well-maintained. He shares that before Partition in 1947 Muslims and Hindus lived in Said Pur together and worshipped alongside each other in this area. Later the temples were preserved as part of the museum.

We take a look at the hollow tree next, our friend notes that this is “one of those trees that ignites from the inside once it’s grown,” as if that’s a perfectly normal thing we should know. We wonder at the charred insides of the tree… though I’ll admit to still being doubtful that this is a thing.

Our guide takes us into the larger building that is one large room inside, empty except for pictures that line the walls and a large fireplace at the far end that doesn’t seem to have been used in many years. We walk around looking at each picture and listening to our guide and friends’ explanations of each one. At first, I can’t help feeling a bit bored, but soon become engrossed as we see that the pictures show old views of the village and Islamabad before and after the capital city’s creation. We stare back in time at empty farmland with Said Pur and other small villages the only civilization for miles around. As we progress, we see the well-known capital buildings rise up from architectural plans, to skeleton frames, to the familiar forms we drive past every day. 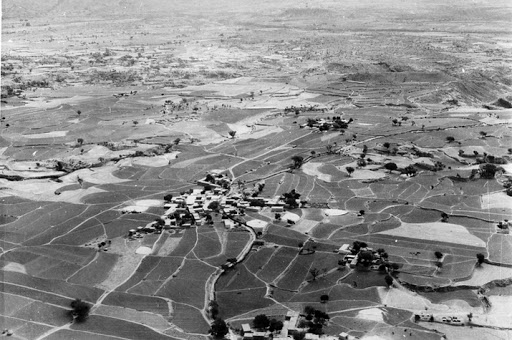 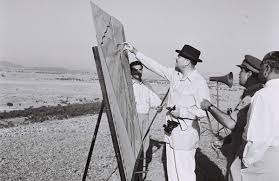 A couple of the old photos found here

There are also photos of Said Pur before it was converted into a tourist destination in 2007… I regret not taking more pictures. It looked largely the same, just with less parking and no restaurants. Wide-eyed children seated in rows of chairs stare out of one photo taken in the very room we’re in, back when this building was a school.

Finally, our guide unlocks the Sikh gurdwara turned mosque turned preserved historic building, and we duck our heads to make our way inside. “The ceiling is so low here,” my friend translates, “so that you have to bow to God on your way in.” It’s quiet and bare inside, the sounds of the village muffled from within its walls. 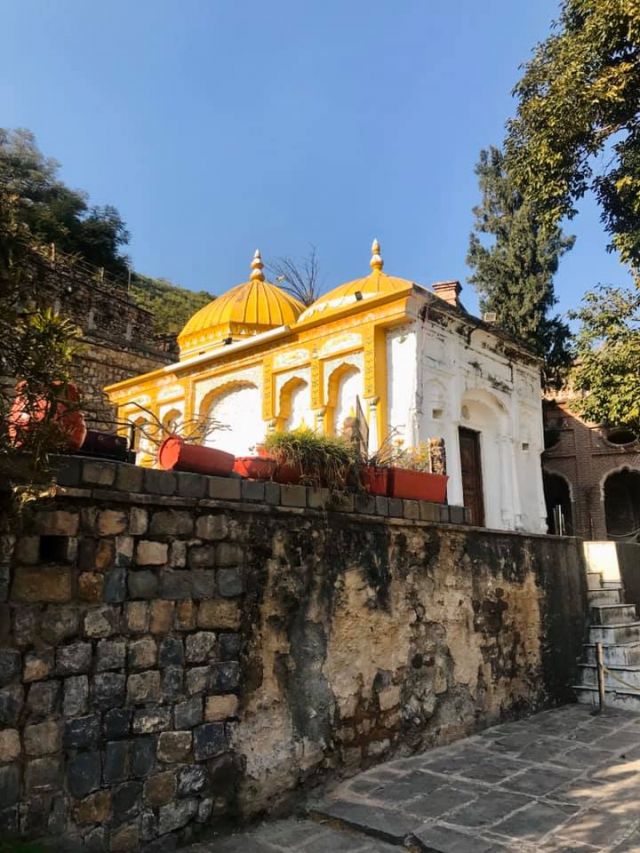 Walking back out into the sunny day, I am thoughtful and grateful that we came to this little piece of old Pakistan.

I’ll end with a note that the past month brought orange season to Pakistan! I love how seasonal fruits are a big part of life here. During our wandering around the village, I commented that I had yet to try truly delicious oranges here… I may have mentioned how good California oranges are as well. Turns out our friends’ family own an orange farm, so in true Pakistani hospitality they gifted us ONE HUNDRED oranges, which is apparently the standard gift size. I gave most of them away to friends and colleagues, but was still left with a sizeable number for us. 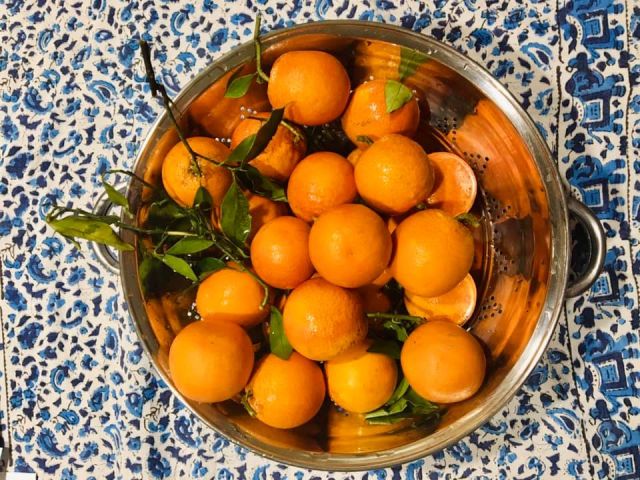